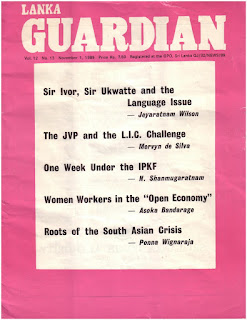 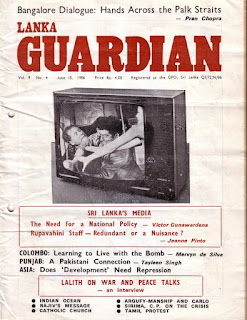 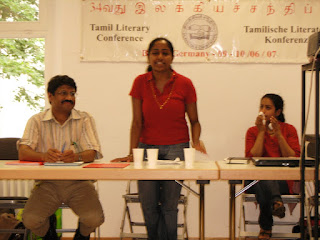 The Ilakkiya Chandipu took place in Berlin from the 9th to the 10th of June, 2007. Translated literally from Tamil, Ilakkiyach Chanthippu means `Literary Meeting’.
However, the concerns of the group are much wider and include all branches of the arts, and cultural and social issues, particularly from a diaspora perspective.


Because of the pogrom in Sri Lanka of 1983, a large number of Tamil refugees fled to Europe, the word “refugee” being derived from one driven to seek “refuge”. Most of these refugees were young, and had completed ten to twelve years of schooling. Because of asylum laws, they were allowed neither to work for a period of five years nor to study with their asylum paper. They lived in refugee camps in miserable conditions, not knowing the language, isolated and lonely, facing a very uncertain future. In their plight and predicament, some created stories and essays, poems and songs, and were active in “publishing” literary magazines in Tamil, albeit on a very modest scale. In 1988 there were more than twenty-four such magazines, hand-written or typed, circulating in Germany. In that year, in a small city close to Dortmund known as Herne, the editors, readers of these magazines, and interested persons organized a meeting to discuss the content of what had been produced. From this beginning, the informal but active Ilakkiyach Chanthippu has grown, and now has regular members not only in many European countries but also in Canada.

As already indicated, the aim of the meetings is to foster interest in creative work, social issues and problems through the sharing of information and, above all, through free discussion. The Ilakkiyach Chanthippu has attained a forum for the participants to express their opinion freely and democratically, where as such freedom was not available or in danger in Sri Lanka. The Ilakkiyach chanthippu was a strong voice to condemn the Human rights violations, political killings and such as expulsion of Muslims from North and East (Muthur) and Tamils from Colombo.
Until the mid-1990s, the association met every three months in one of the European cities; now the meetings tend to be twice per year. On average, about seventy take part. Since we function without financial help from any government or organisation, those attending are accommodated in private homes. This provides a personal atmosphere, and enables literary discussion to continue long after the meeting is over. Though originated by Sri Lankan Tamils, invitees represent many countries and languages. Where a writer speaks in her or his language, arrangements are made for immediate translation into Tamil. There is no formal, hierarchical structure: those in the country where the meeting is to take place make the necessary arrangements. At the end of each gathering, the venue for the next meeting is agreed upon. There is no formal division such as between the stage and the audience; instead, everyone sits in a circle. There is also no hierarchical structure, and the expense is met by attendees at the conclusion of the meeting, so that there is no paper (or further) accounting work to be done.In the past 19 years of history the Ilakkiyach chanthippu was seen as an organization against the militant armed groups in Sri Lanka by their supporters and therefore its participants had to face several obstacles. One of the regular participants of the Ilakkiyach chanthippu and a publisher Mr. Sabalingam was shot and killed by the LTTE in Paris in 1994.
The rare collections of the documents of the past meetings were robbed, from the house of Luxmy, the Editor of the magazine “Uyrnilal” on 18th February 2007. 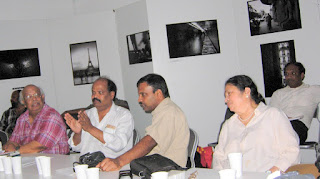 The meeting this year began with an introductory address by Mr. K. Parajasingham (Berlin) who has long been an active member of the association, followed by a brief self-introduction, each one mentioning her or his special (literary) interest. Since literature emerges from lived life, and life is affected by public (political) events, the sudden expulsion of Tamils from Colombo in the small hours of Thursday, 7 June 2007, was noted. This was followed an exhibition of Mr Raveendran Pradeepan’s photographs, pictures that give an insight into the life of some of those in Paris who are without valid permission, struggling to survive, avoiding attention and detention. An introductory lecture by Mr. Nadarajah Suseenthiran-Straube on photography and about Mr. Raveendran Pradeepan gave some guidelines how to approach with the social consciousness the modern photography in the digital world. The photographer was present and explained the background to some of his work. Certain journals such as “MANN”, “UYIRNIZHAl”, “UYIRMEI”, “VADU”, “THESAM” and “INI” were introduced and evaluated, relevant publishing and contact details being provided. Mr. Rajeenkumar has presided this session and Thanabalasingam, Krishna Subramania, Uma, Thevadas, Ashok and Suseenthiran have contributed by their critical statements. These publications covered issues such as Women’s Rights, and the Dalit struggle. The next item was a lecture on the Pakistani (English-language) writer, Sadad Hasan Manto, by Mr Karunaharamoorthy (Berlin), followed by a talk on the contribution made by Moslem writers to literature in Tamil by Mr Rauf Hasim (0slo). Meera de Candappa and Karunya Karunaharamoorthy (both of Berlin) spoke on identity-formation among second-generation members of the diaspora.

The day’s more formal proceedings were rounded with a talk by Mr V R Yogaratnam(Paris), a participant in the Dalit uprising in Sri Lanka, 21 October 1967. The meeting ended with music, both vocal and instrumental. The second and final day began with feedback given to the photographer, Mr Raveendran Pradeepan, and further discussion of his creative work. It was pointed out that an awareness of photography as a form of artistic expression, and of its effectiveness, needs to be developed among members of the diaspora. Mr Nadarajah Suseenthiran Straube gave a power-point presentation on constitutional developments in Sri Lanka, beginning with the days of imperialism and moving into the present. Mr Visvalingam Sivalingam and Mr Bazeer (both of London) spoke on the Tissa Vitharana´s report and majority report of the All Party Conference set up by the government of Sri Lanka. Between them, they covered both the positives and the weaknesses of the report. Those present then joined in a discussion that proved very lively and useful. Mr. Thevadas, M.R.Stalin, Santhush, Luxmy, Inpa,Mallika, Sivarajan and Sivarajah some of them, who have participated vigorously in the discussions. 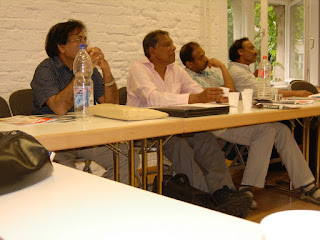 The two-day gathering ended with poetry recitation. The next meeting will also take place in Germany (Stuttgart) at the end of this year.
sent by சுசீந்திரன் unter 17.6.07 கருத்துகள் இல்லை: